We booked a holiday to south west USA, but due to the corona crisis we had to cancel it, so instead let me write about my hobby, flying airplanes.

Today I made another flight in a Diamond DA-40, the PH-TIN (papa hotel tango india november). I flew by myself today. I fly from Lelystad airport (icao code is EHLE). I have a PPL (private pilot license) with SEP (single engine piston), SE-IFR (single engine instrument rating), RT (radio telephony), en LPE6 (language proficiency endorsement 6). Currently you are only allowed to fly IFR departures and arrivals after 1800LT. Hence I filled a flight plan with a 1800 off block time.
The plan is to fly a part of the GRONY1M SID (standard instrument departure) till ERMUR then go to EKNON followed by a RNP23 approach.

This is the airplane: 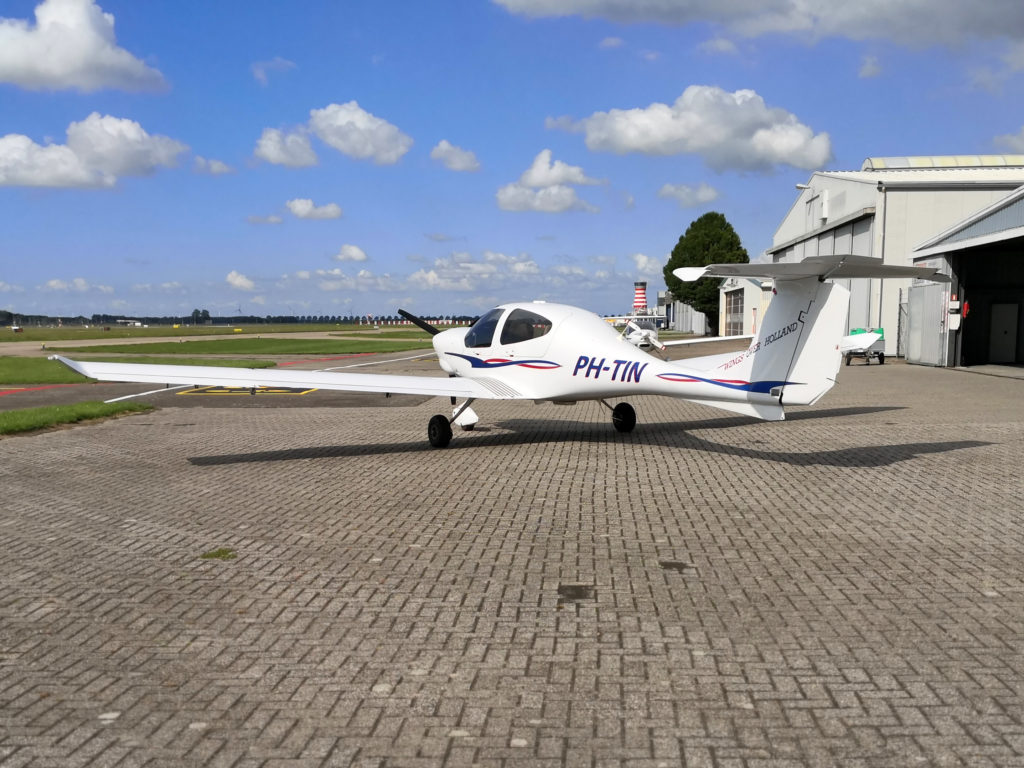 I already put the aircraft pointing in the right direction that I can easily taxi out. In the background you can see Lelystad tower.

After doing the “24h inspection” I continued with the pre-flight checklist till the point where I had to start the engine. At Lelystad you first have to call Lelystad delivery to request a start-up.
This was granded because it is not so busy at this time of the day. I did get a bravo departure assigned, which is a VFR departure. So I asked “confirm bravo departure, I filed an IFR flight plan”, upon which the reply came “standby for ifr clearance”. After that I continued with starting the engine. Made a quick photograph of the inside of the airplane: 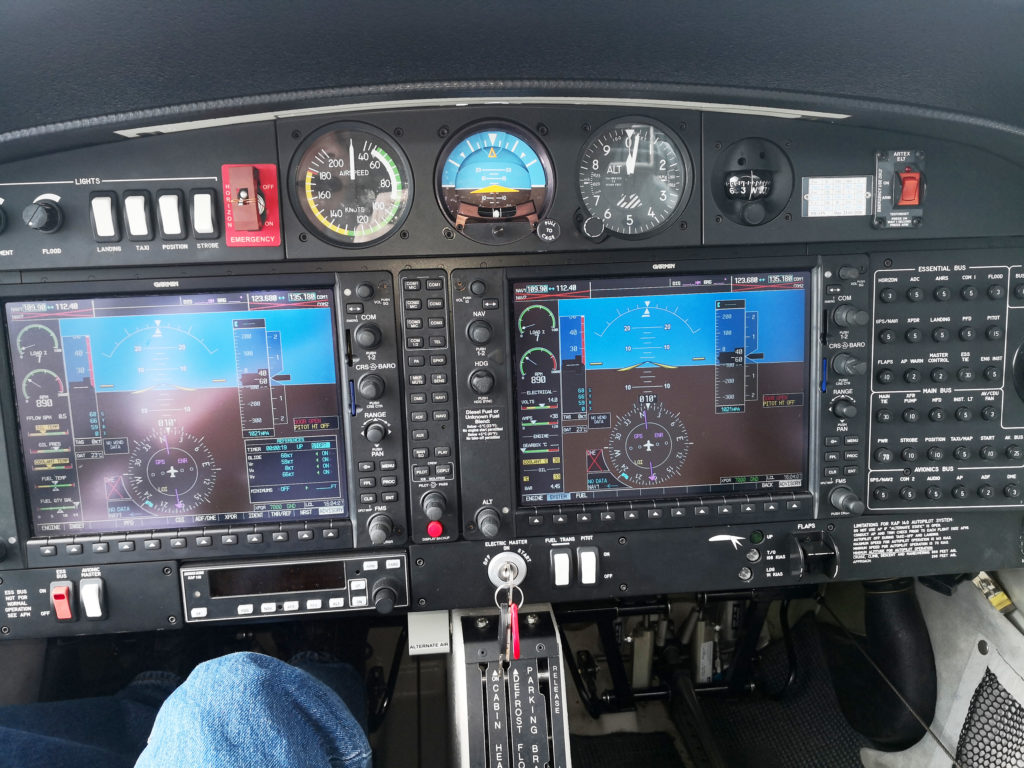 You can see that the “display backup” button was pushed in, because al information is available on both screens. The left display has a tendency to restart when starting the engine. The battery voltage dips too low which causes the system to restart. If you zoom in on the photograph (first click on it) you can see that the airport is below sea level.

I continued with the checklist, after a few minutes I received my IFR clearance with the requested GRONY1M departure. I programmed the route into the flight management system, then switch to tower frequency and requested “Lelystad tower PHTIN request taxi”. I got the assignment to taxi to S1 which is an intersection all the way at the front of runway 23.

So i am going to fly this departure: 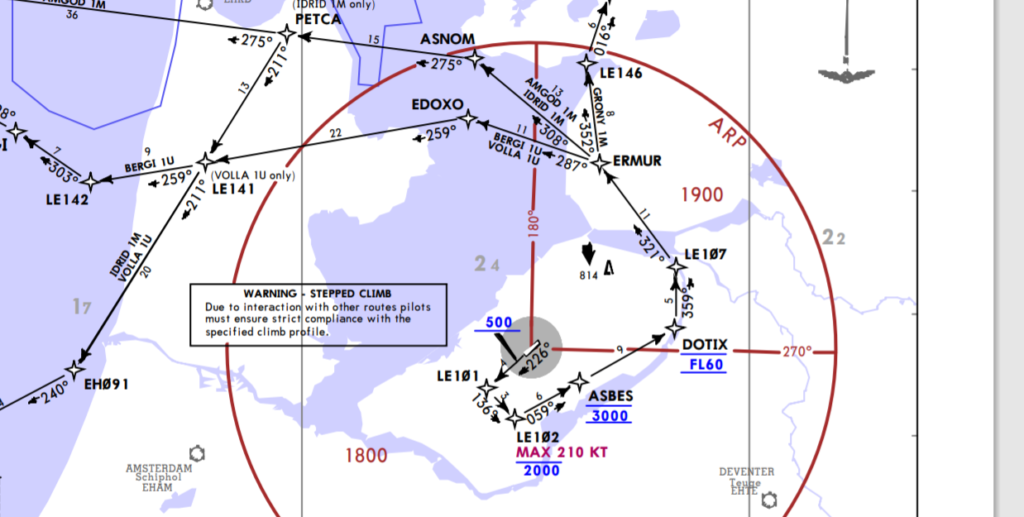 First south west, then south east, then north east then north and finally north west till ERMUR. As you can see there are some height resrtictions on the route. Normally from DOTIX you fly at FL60, but at FL60 you cannot file a direct-to, so I filled a flightplan with FL50.

After my run up at S1 I called tower again to let them know I was ready “PHTIN S1 ready for departure”, I got a “line up and wait runway 23” as reply. After a short wait on the runway I got a “cleared take-off”. I started flying the departure with a little help of the auto pilot. After a short while I was asked to switch to lelystad arrival on the radio.

After ERMUR I went in the direction of EKNON, to start the RNP 23 approach. I got a “cleared approach” which means that I am allowed to followed the route including the glidepath: 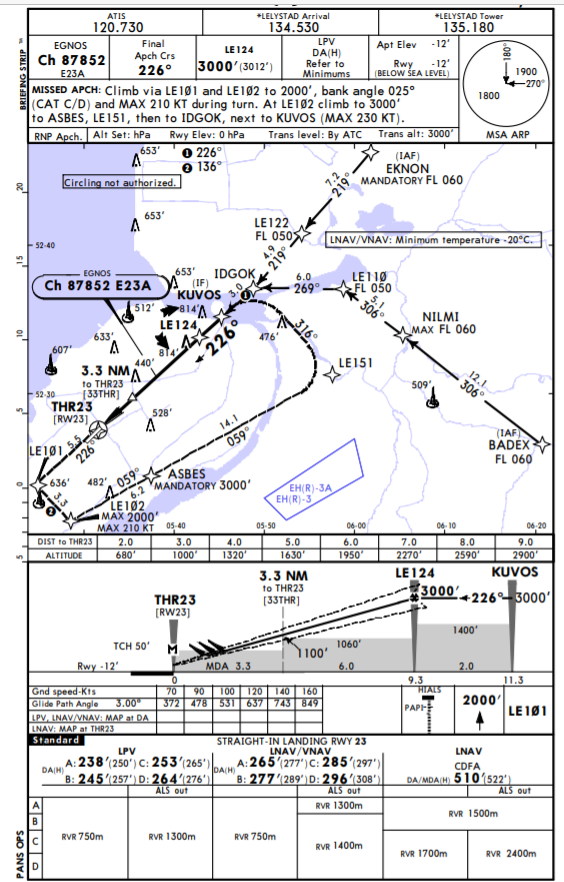 After passing EKNON I made a few photographs (autopilot is pretty useful!) 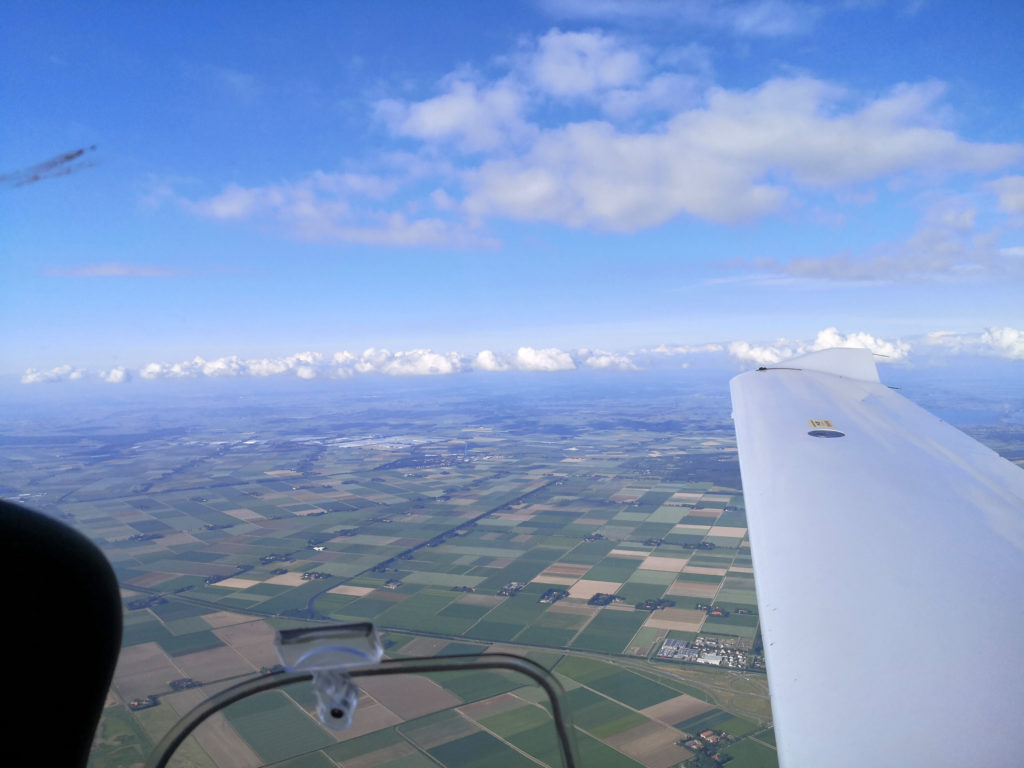 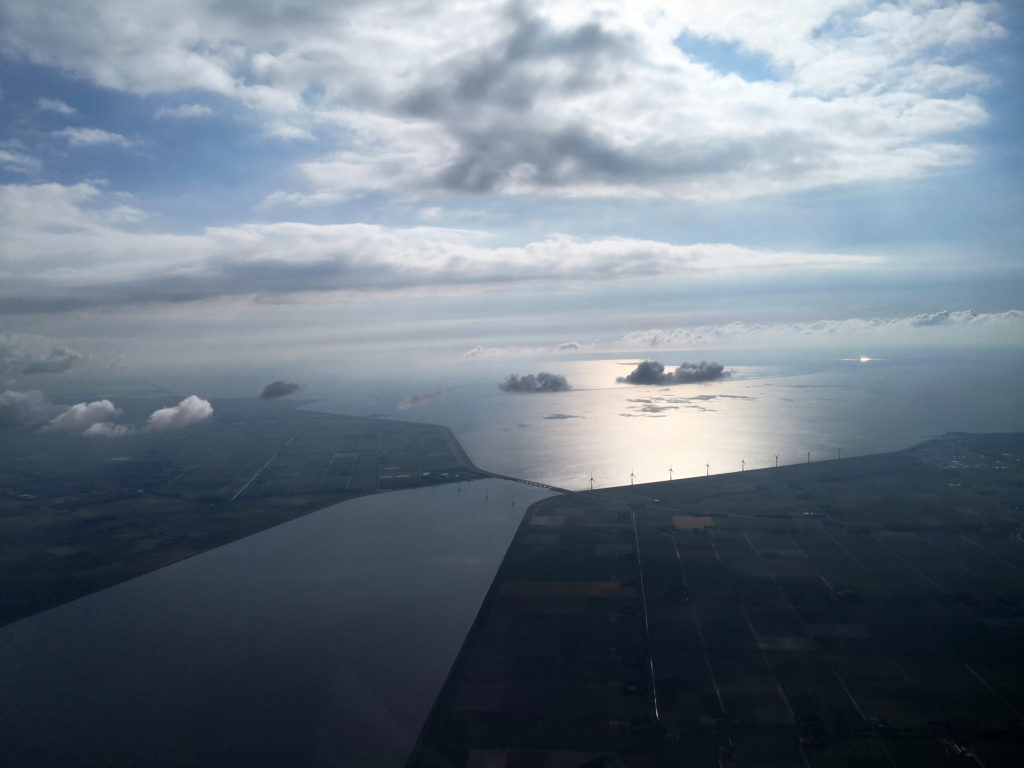 The approach chart above shows that at KUVOS you need to be at 3000ft. Then at LE124 the (GPS) glidepath starts and you start the finale descent to the runway.

Just before LE124 I was asked to switch to tower frequency. After I did that I was cleared to land “PHTIN runway 23 cleared to land”. There was some crosswind at the runway (~10 kt) en was also a bit variable, but I made a smooth landing. After vacating the runway I immediately got a clearance to taxi back to the hangar. After parking the aircraft, I made a quick photograph again 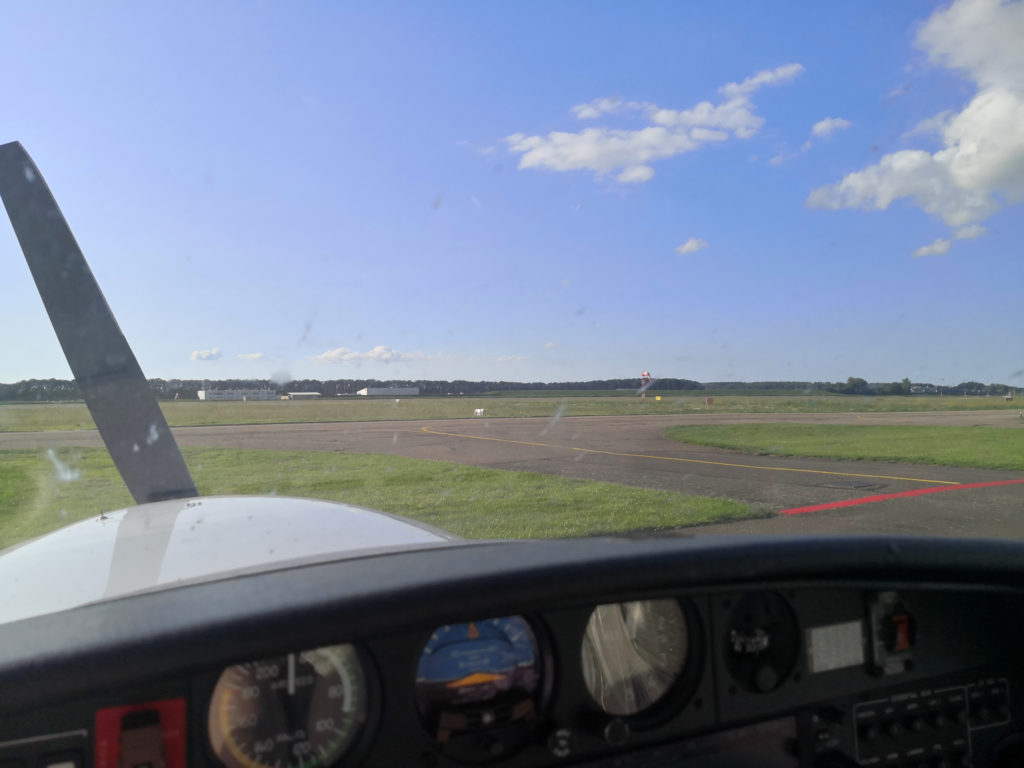 Luckely there was still one of the flight instructors present so he could help me put the aircraft back into the hangar. It is very difficult to put a DA-40 by yourself in the hangar, I actually already agreed to leave the aircraft outside if needed.

The route I flew took 42 minuten. After I got home i looked up the flight on flightradar24.com and downloaded the GPS track: 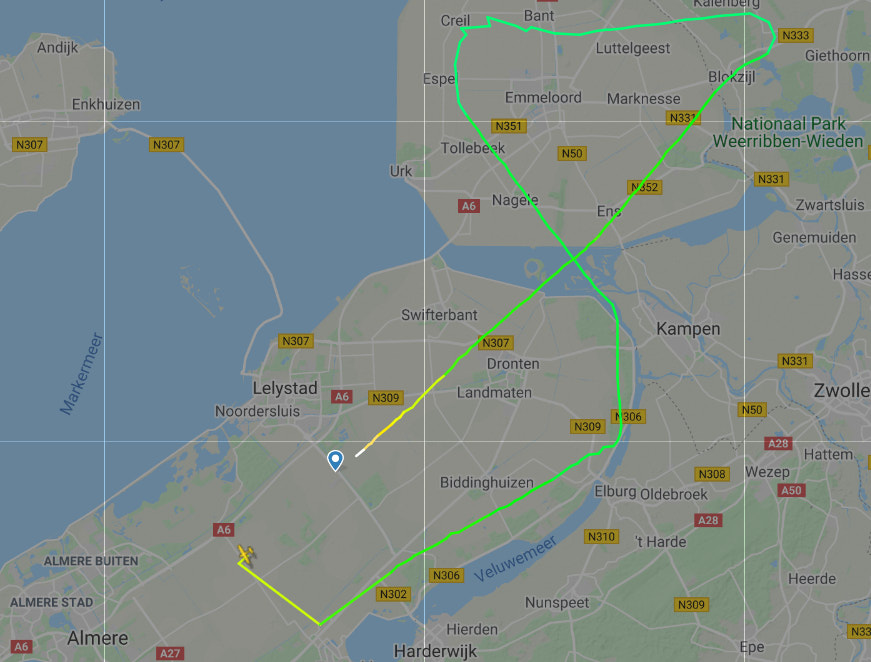 The strange zig-zags are of course not real.

It was a nice flight again, good to be IFR in the air again. That DA-40 with G1000 is really a nice aircraft to fly. It has really good equipment on board. These days a lot of the (IFR)navigation is GPS gebaseerd, hence you need to have a good GPS receiver on board. The two large LCD screens help to get a lot of situational awareness