Today we went to the Blue Room. This is a cave which is lit naturally with blue light because the light in the cave comes in via the water. You can get there from Playa Santa Cruz. On the beach there are some benches with parasols (N12.3053983 W69.145513):

From there you can take a boat or go on foot. I wanted to go on foot, but Monique did not feel like going, so I went alone. From the beach you can take a trail towards Playa Santu Pretu (it starts at N12.3053983 W69.145513). This trail starts just before the location where the boat of “captain good life” leaves. You first have to go up a bit. I would not go bare feet, but maybe wear watershoes. They will come in handy later as well. Also take a bottle of water as it may get hot. I also took my diving mask and snorkel. I left my flippers in the car. I did want to take the underwater camera, but I forgot!

Once you are at Playa Santu Pretu there is a sign to the trail going to the blue room. This is the path along the coast. Next to this path there is also a more easy path. To take it, once you reach the beach you take a immediate left turn and walk away from the sea. You will end up on a rather wide path which goes up a bit then takes a right. Then you just have to keep walking straight kind of parallel with the shore. At one point you will get to a sign which points to the right towards the sea. Once you reach the sea you can go down the rocks all the way to sea level. The cave is approximately at N12.2972127 W69.1553550.

I then jumped in the water (it is a jump of less than 1 meter, so nothing to be scared of) and swam towards the cave. There were some more people in the water. To get into the cave I did not need to dive under, apparantly it is low tide. Regardless it is wise to keep your hand above your head as this will prevent bumping your head on the ceiling. The cave itself is rather big in the center there is a rock where you can stand on to rest, if needed. Maybe you can also climb up the wall on the side of the cavem but I did not try that. The blue light was not really there, as the entrance of the cave was above the water. It was kind of special to be in the cave, but too bad the light effect was not there (and also unfortunate that I forgot the caemra). So if you want to visit here then check the tide. If you want to easily/safely want to enter then go at low tide. If you want to see the blue light then go at high tide. In hindsight I should also have taken my flippers, because if the entrance is underwater then it is so much more easy and safe to get in with flippers.

After a few minutes I swam out of the cave again and went back on land at the same spot I went in. You can grab onto the rocks with your hand and push yourself up with your feet. Watershoes really are helpful for that. If you do bring flippers then you can first place them on dry land then put the watershoes on before you go up. I would take everything into the water, maybe place the watershoes etc in a net. There seem to be thieves there whch steal things you leave on shore. Car keys you could put in a watertight container. Camera I would not leave for sure, so either take a watertight camera or leave it hidden in the car.A Alternatively you can go in one by one.

On the way back I took the same path. After I returned I shot a photo of the start of the path: 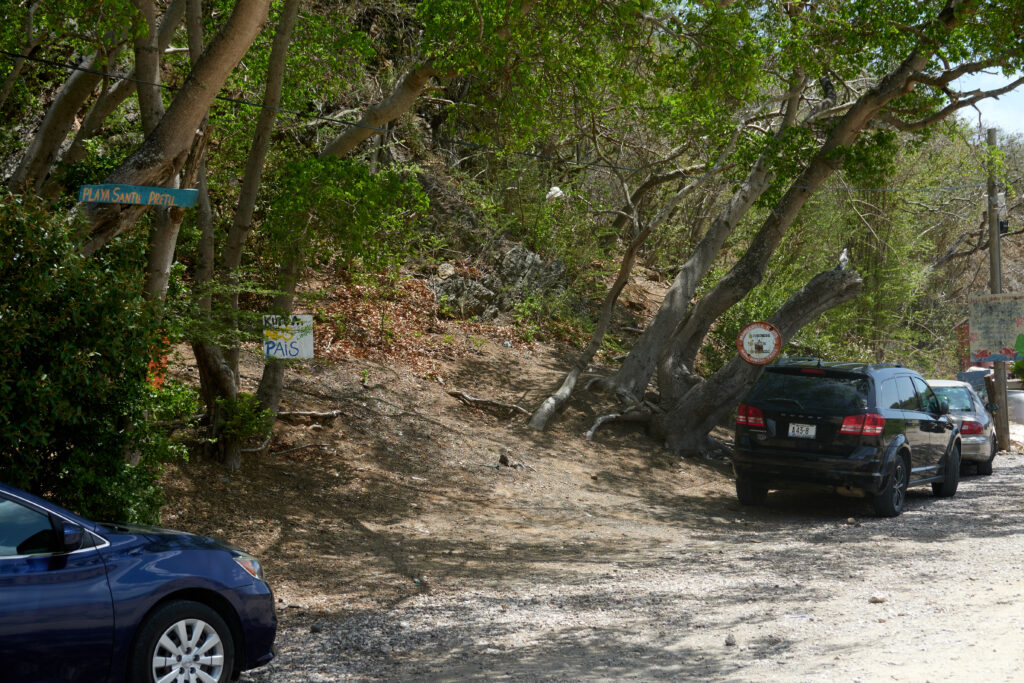