Today we will go to Revelstoke, but first we did a breakfast at the same location as yesterday Bliss bakery in Peachland. Then we went to the Kettle Valley Railway (N49.587019, W119.732276) to take a ride on the steam train. Yesterday we were there already, but then the train was not running, but today it does. There is a choice to go in a closed carriage or an open one. The closed one is the more luxurious one, but we thought it would be more fun to take the more open carriage, because it is easier to look out and gives more a sensation of the speed the train is going. After buying a ticked we had to wait on the platform. Its just like taking a regular train! 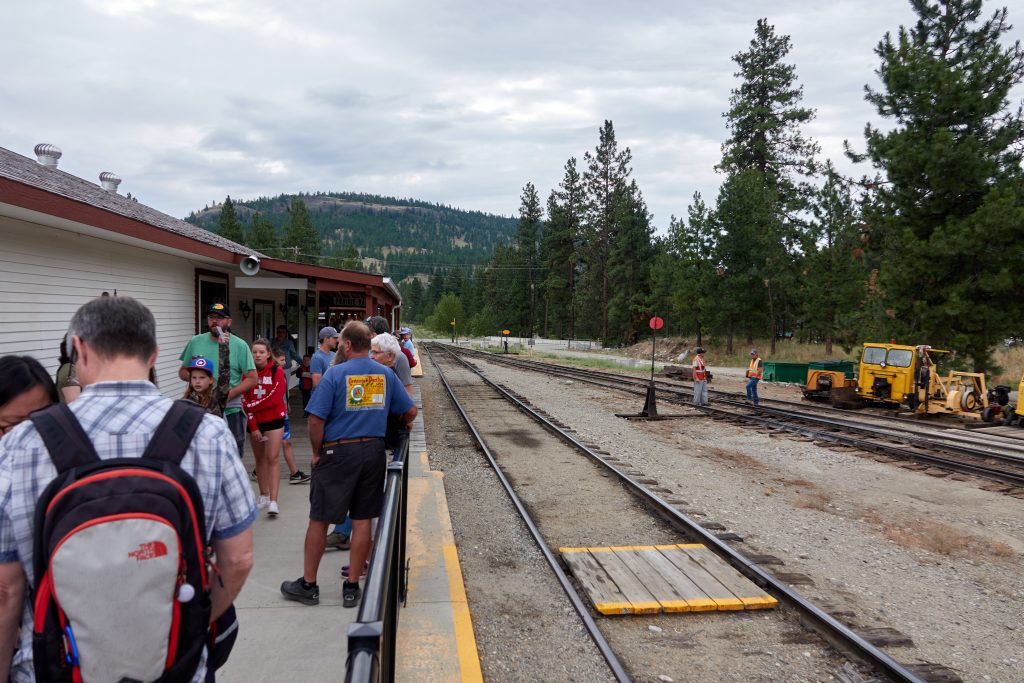 The locomotive went in reverse from the hangar and went past the station to change tracks: 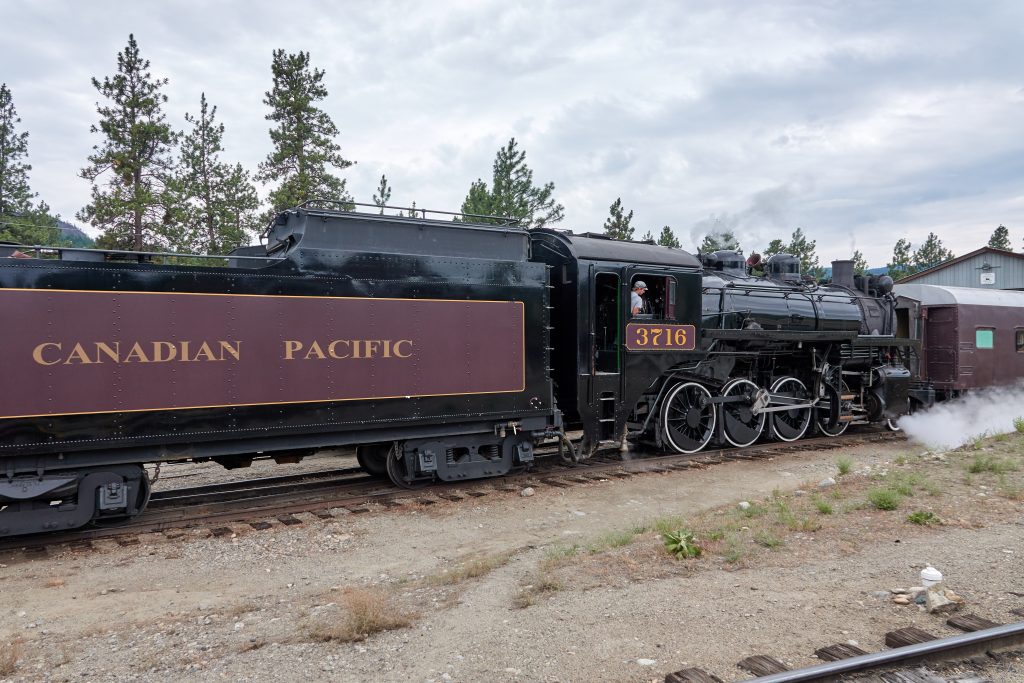 Then went forward to pickup the carriages. After we boarded the train and some instructions of the staff the train got going. The locomotive is the wrong way attached to the carriages, as you can see in the next picture. It is pulling the cars though: 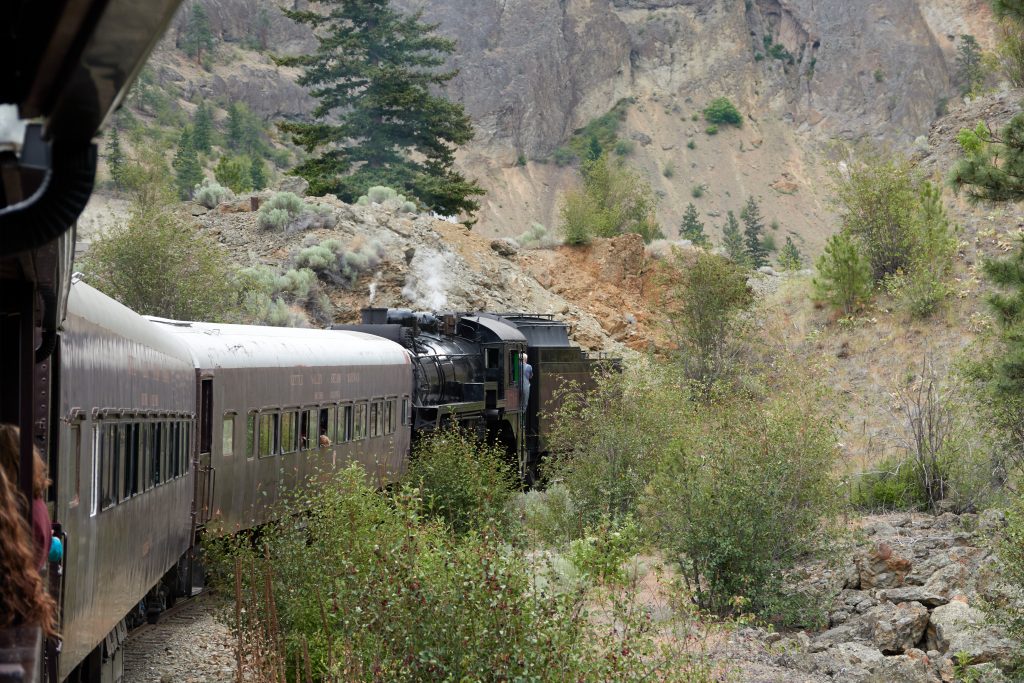 The train stops after nice ride through the mountainous terrain. The locomotive was detached and was attaced again on the other side of the carriages, to take us back to the point of origin:

But first the train went a bit further onto a bridge: 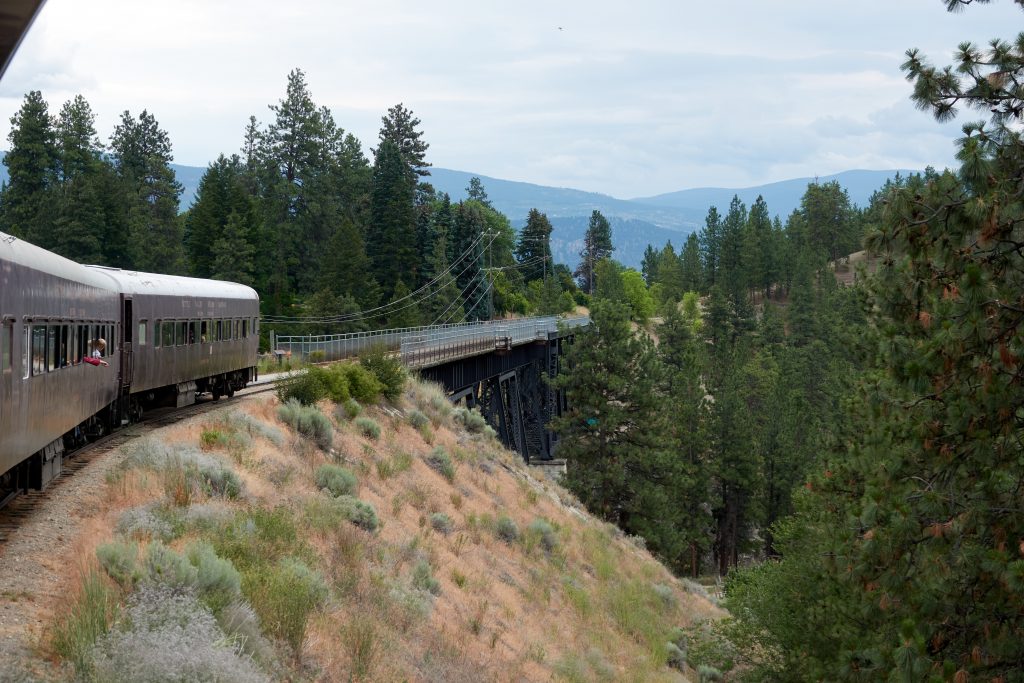 We had a nice view from there. After stopping there for a while to take some photographs the train moved on to stop at the “Canyon station”: 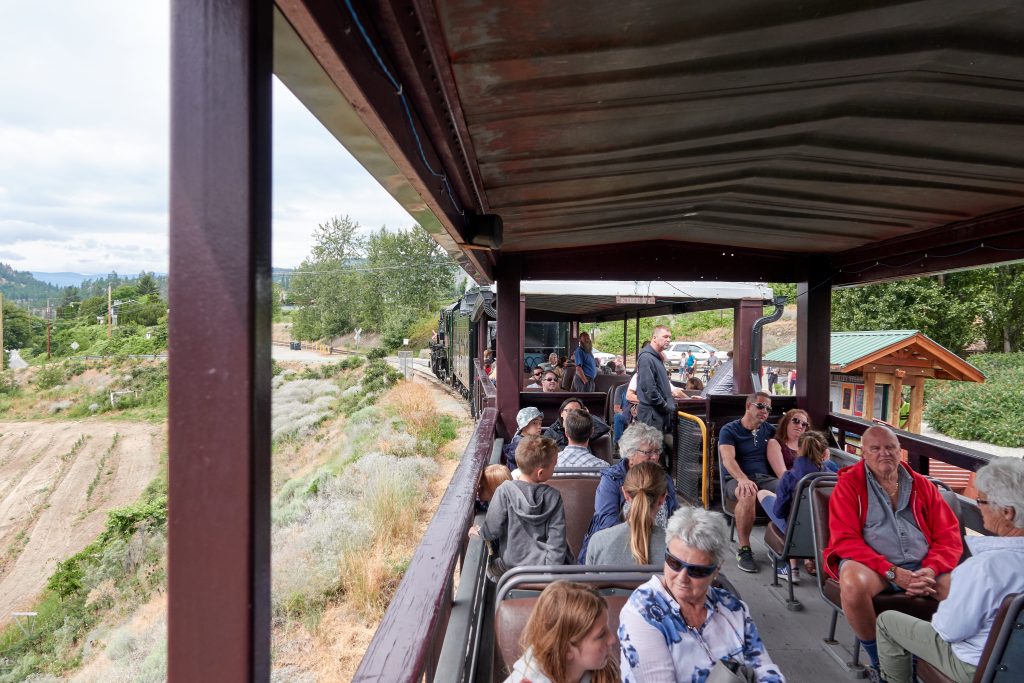 The water in the locomotive got refilled here and we could get out to make some photographs of the train: 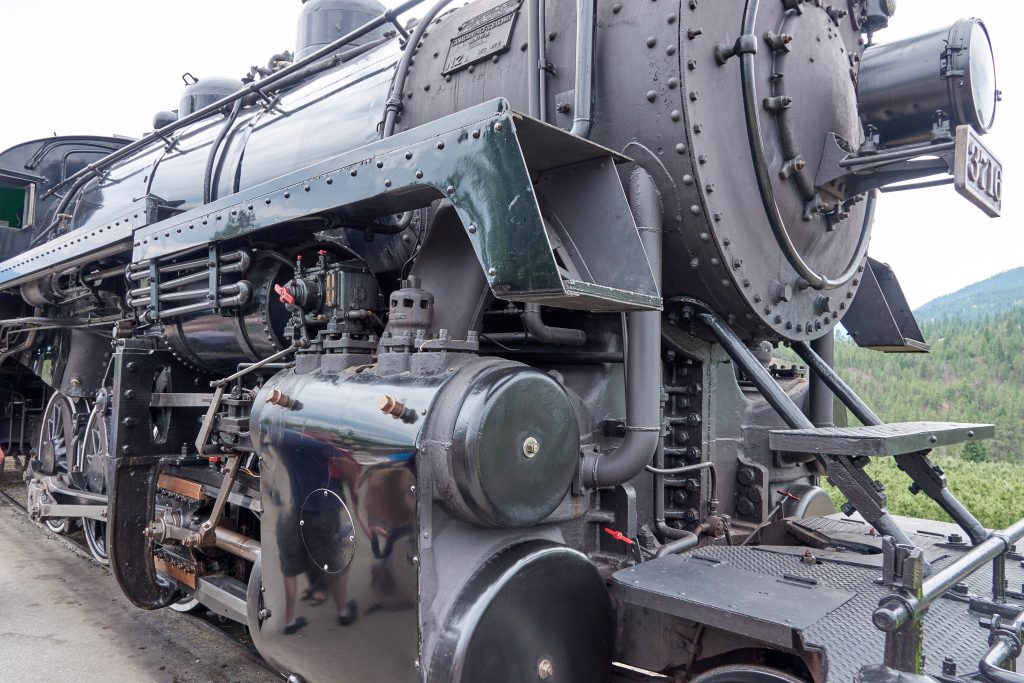 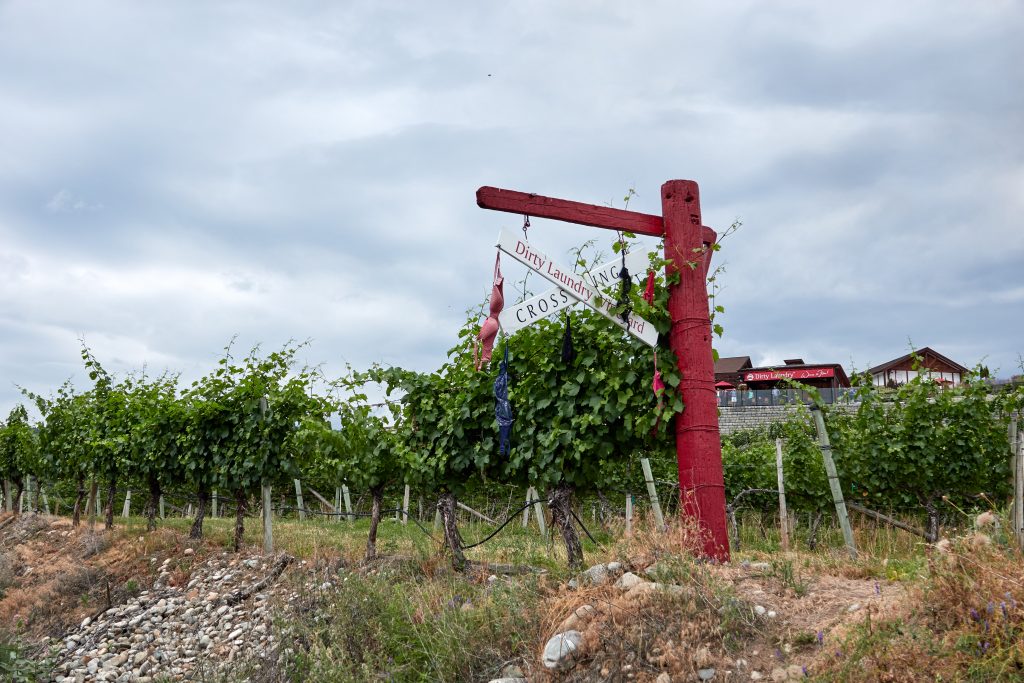 Yesterday we already saw different vineyards. At one point we were nearing the point of origin again. The departure station: 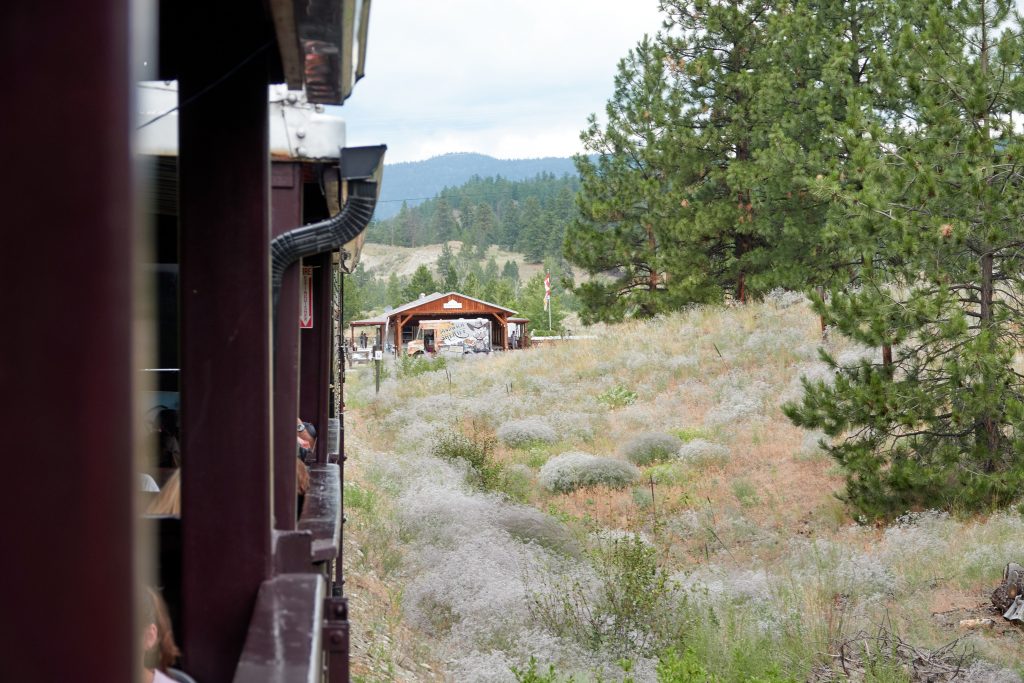 Afer we got back to the car we started driving in the direction of Revelstoke over the 97. There were a number of fruitsellers on the 97. We stopped at one and bought some peaches and cherries.

Last stop before our destination for today is “The last spike” (N50.976300, W118.723283). This is the place where the last spike was struck for the trans Canada railway, i.e, the spot where the tracks going east and going west met. There is a monument there with some old rail tracks and a small souvenir shop. 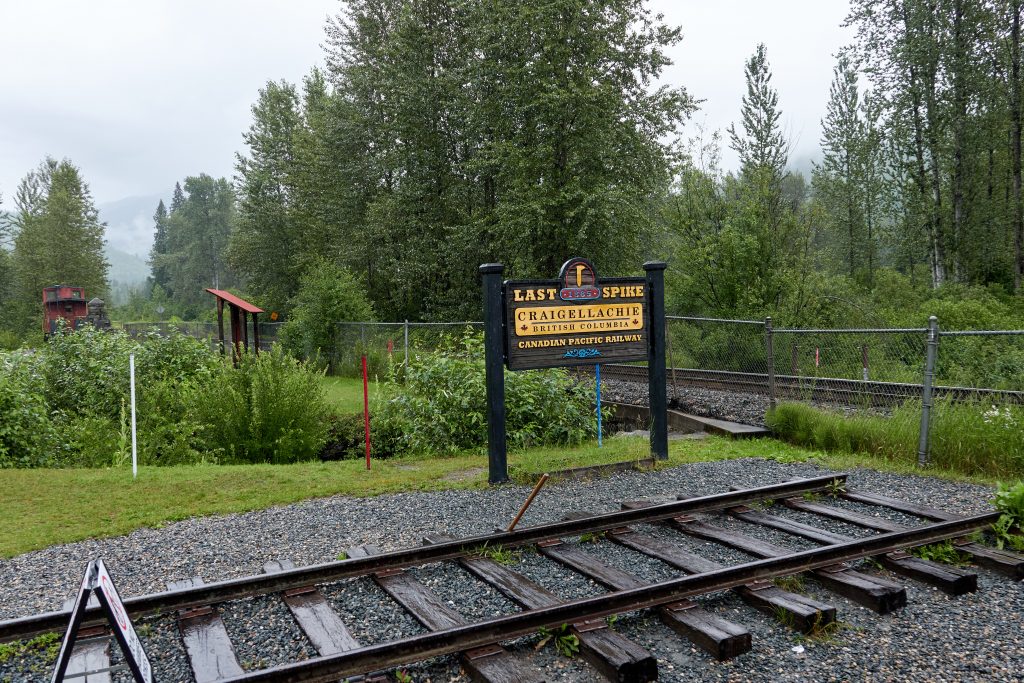 As you can see on the photos, it started raining rather a lot. So we did not stay there long (there was also not really a lot to see). We drove onwards to our hotel in Revelstoke, the “Stoke hotel”. The room was nice with a nice view of the mountains but was situated next to a rather busy road with a lot of noise. For diner we went on foot to a restaurant “Zalas steak and pizza”. I had a medium rare steak, but it was actually cooked more medium well done. I did finish it and it was ok (bit of a waste to throw away), but we did get a desert for free as compensation. That was handled rather well.