Today’s plan is first to go to AVIS to switch the car, as we had an engine warning light yesterday. Then we want to continue to Banff National Park. Luckily AVIS is not that far away, i.e. in downtown Banff about 25 km/15 miles from Canmore (N51.178422, W115.571679). While driving to Banff the warning light was still on. We had to park the car in the street because this AVIS is in a small shopping mall. So once inside we explained the problem. A rather helpful employee went outside with us to look at the car. So he started the car and of course no warning light… He proposed to put car in the parking garage for now because we could only park for 15 mins on the street. After that we went back to the AVIS office and he checked the computer to see if any other comparable cars were there. So we went back down to look at the car and so we agreed that one was good. But once we went back to the offise another employee rented out that car. So we had another look at other cars, but non had build in navigation. We could get a portable garmin but we had to rent it then and that was rather expensive. So in the end we decided to keep the car we had, because the light actually was off…

After we went back out we parked the car a few streets from the center to get some breakfast downtown in the same shopping mall as where the AVIS office was. Walking there we saw a nice church: 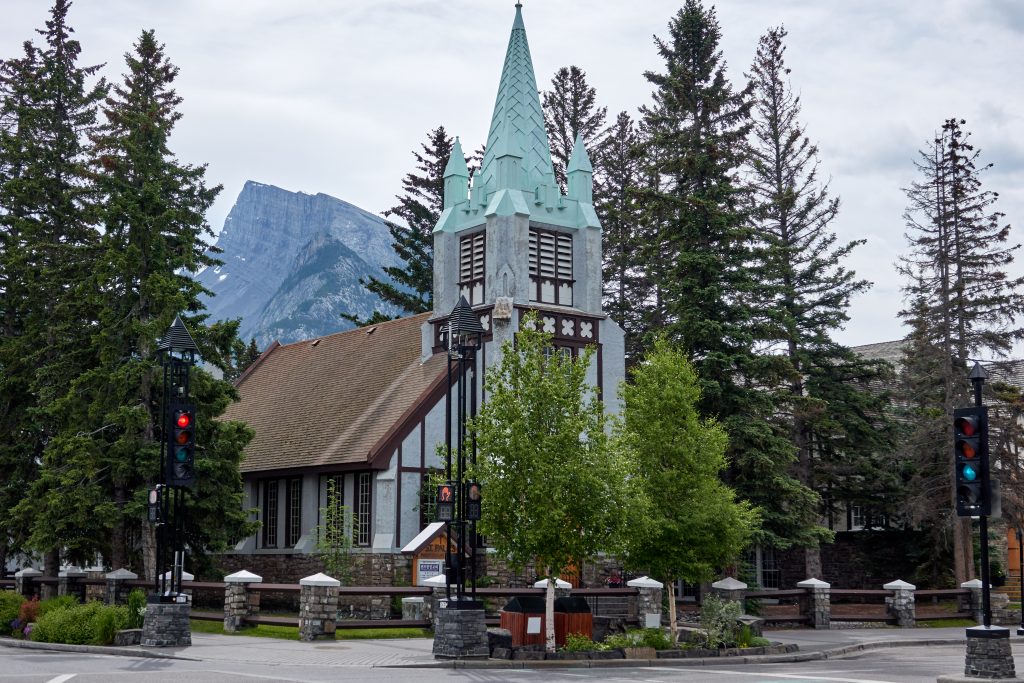 We ended up eating at Subway. 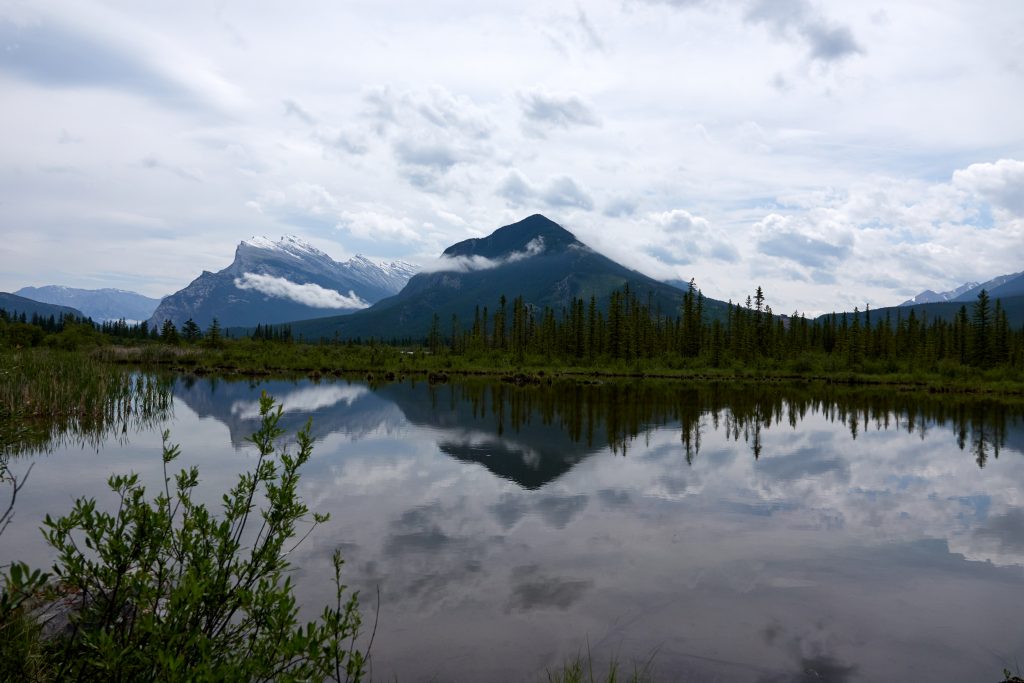 Zoomed in on Mt. Rundle. That is a rather impressive mountain! 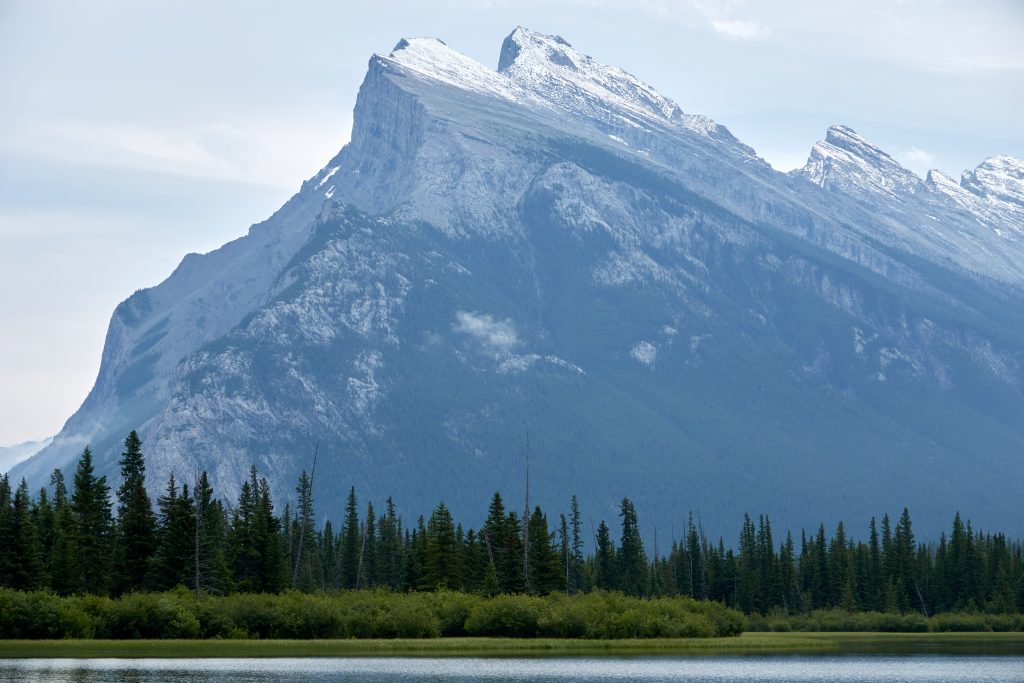 All the way at the end of the road (Vermillion lakes drive), you can continue to walk or bicycle, but that did not really look that attractive, because it was not really clear where we would end up or what there was to see therre. So we turned around and went to Johnston Canyon (N51,245525, W115,839811) via de Bow valley parkway (route 1a). There is a hiking path in this canyon that goes up to two waterfalls, the “lower falls” and the “upper falls”. You end up first at the lower falls: 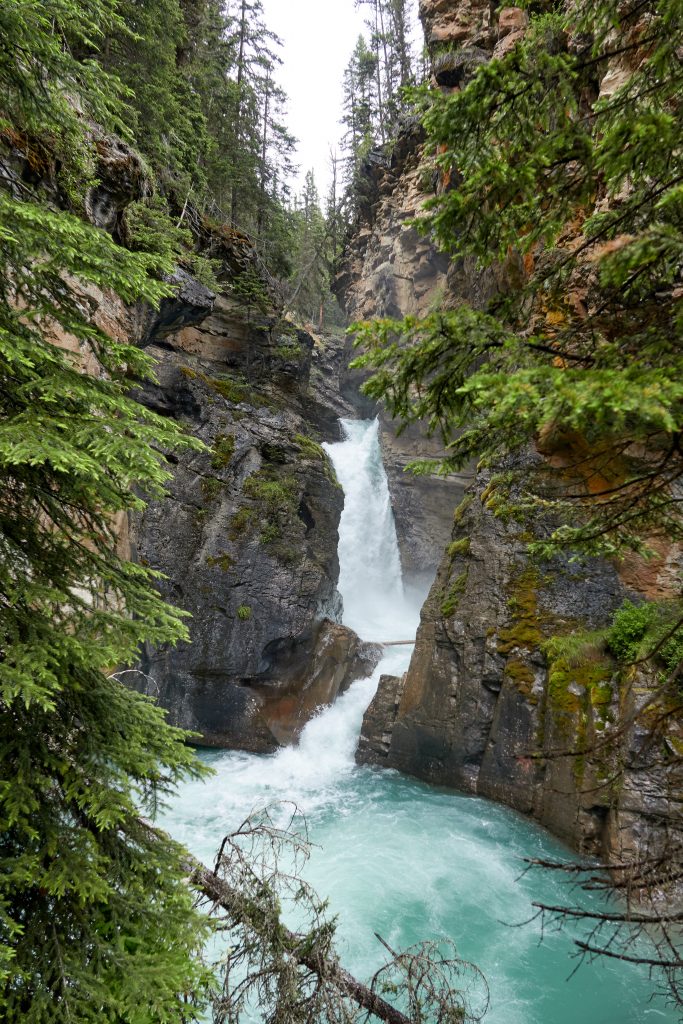 A little bit further up there is a small cave where you can get really close to the waterfall. You do get rather wet from the spray of the water (hence I took a photograph with my phone instead).

We did not feel like walking all the way to the upper falls so we turned around and walked back. Along the way we did see a squirrel near a bench:

We also wanted to see Lake Moraine and Lake Louise. Going there we spotted a small deer at the side of the road. So we stopped to make a photograph: 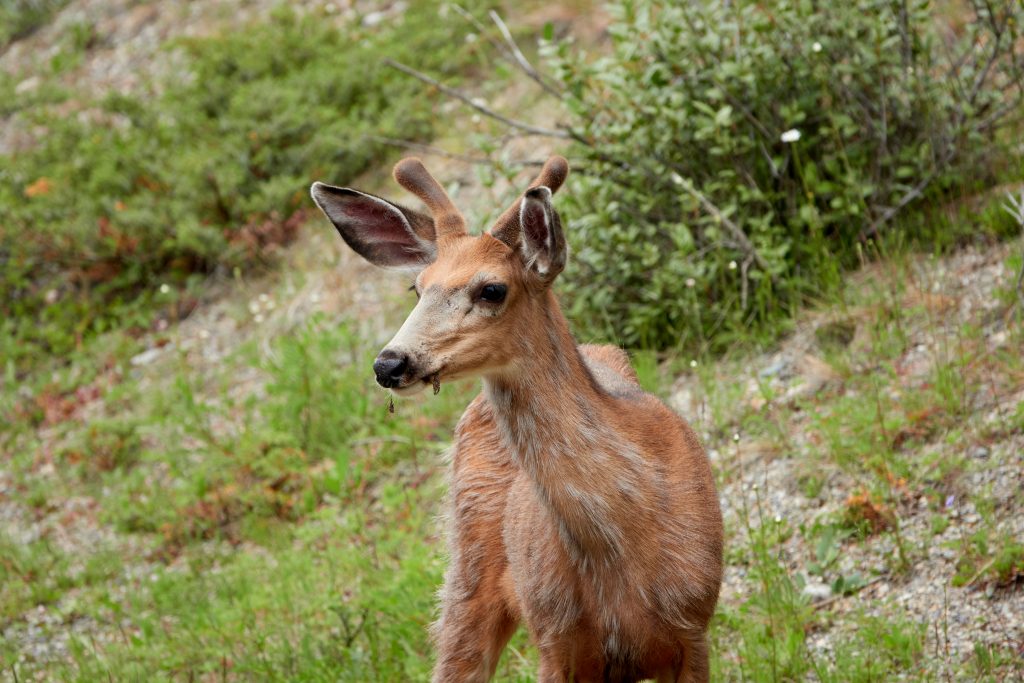 We went first to lake Moraine (parking area N51.330269, W116.180910). Because of all the traffic we could not go left from Lake Louise drive to Lake Moraine, but instead we had to go via the parking area of Lake Louise then drive back. But it was worth it in the end: 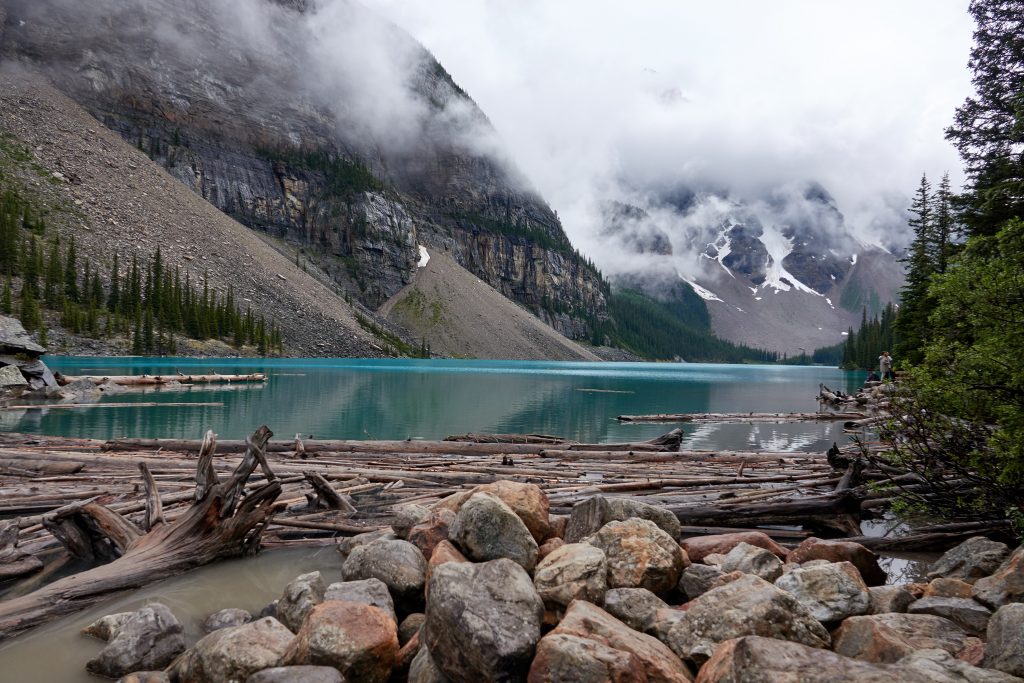 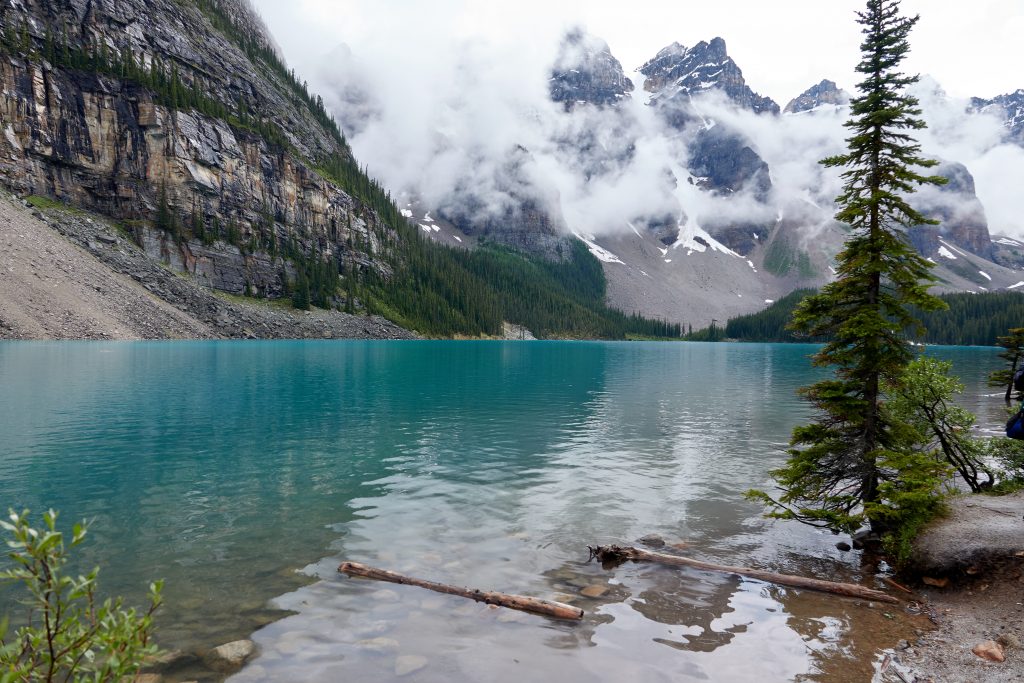 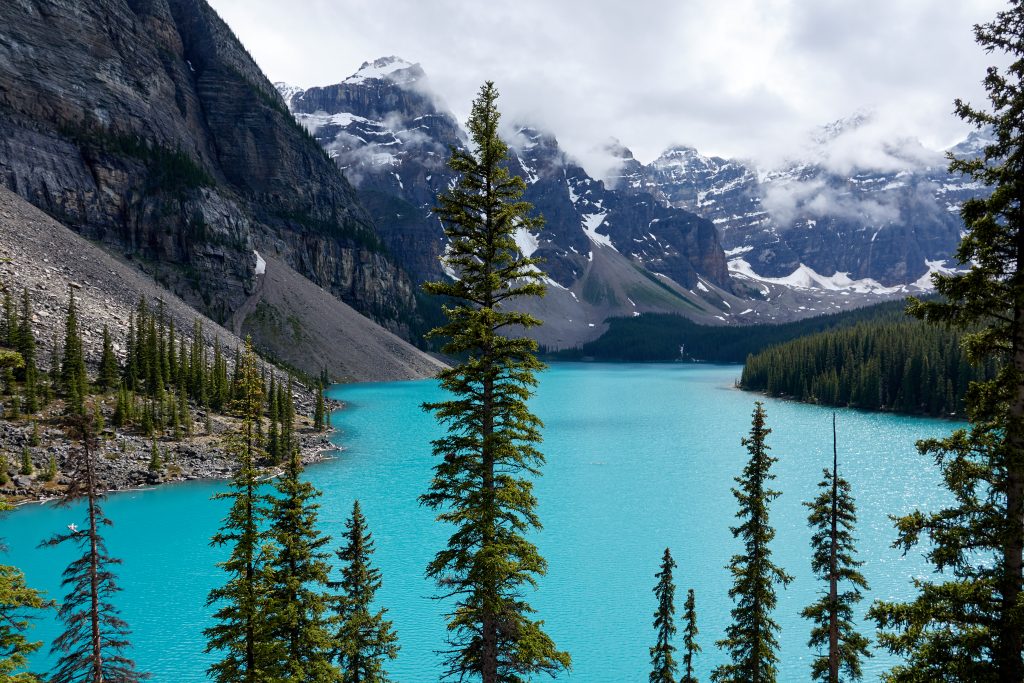 This photograph is taken from a big pile of rocks from where you have a good view of the lake. 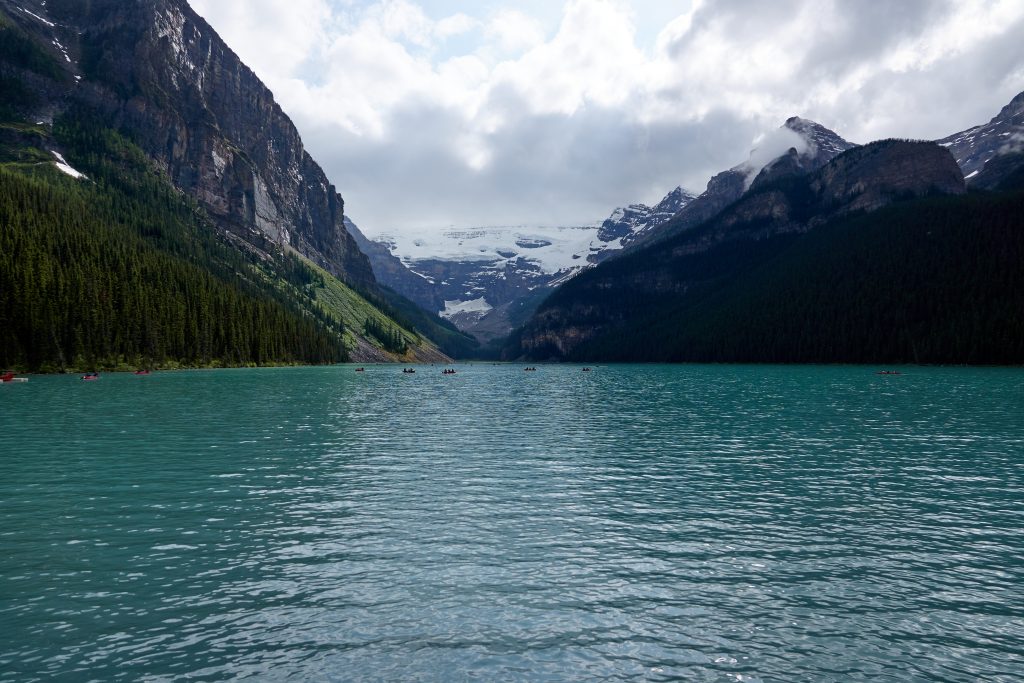 If you zoom in on the photograph (first click on it) you can see that there are a lot of people with boats on the lake (I guess you can rent them there somewhere).

We spotted a bear on the way back to Canmore on the Bow valley parkway (1a): 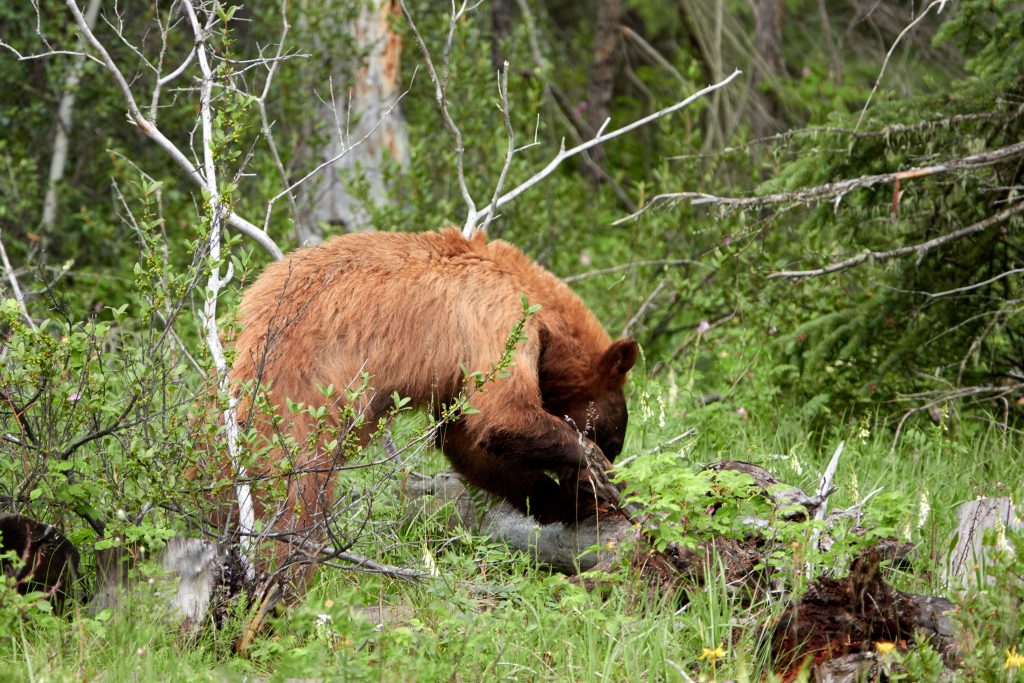 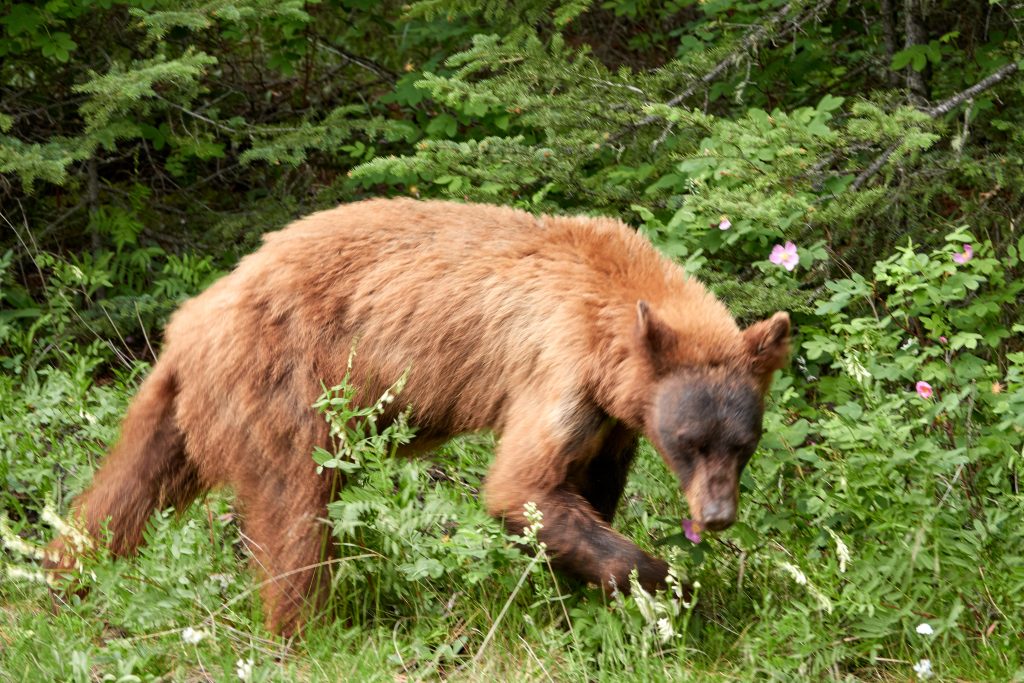 This appears to be a black bear (despite the color).